Cookstown-based main contractor McAleer & Rushe is halfway through a two-year project for developer That Group on a sloping, challenging site in Bournemouth.

The seaside town is known for its beaches and the construction team had to remove 100,000 cu m ofsand and gravel from the site before they could begin foundations work.

The site, formerly a car park, had a level difference of about 20 m and needed to be flattened.

Upon completion in just under a year’s time, the site will house a 172-bed four-star Hilton hotel, a 120-bed Hampton by Hilton hotel and a block of apartments for private sale.

A two-storey car park will sit beneath the smaller hotel and the apartments.

McAleer & Rushe is delivering the shell and core of the apartment block for housebuilder Redrow, which bought the residential element of the scheme from That Group.

“From the start, speed of build has been a critical factor.

“It’s a very tight programme for a job of this size,”

“Everything is commercially driven these days. We try to condense everything as much as possible to make it as attractive as we can for the client.”

The project started with flattening the site, using 60-tonne and 45-tonne excavators.

“The height difference meant you were double-handling in a lot of cases because you were trying to cut a face 10 m high,”

“You had to put shelves in. It was easy material but there was a lot of it, so it was very time-consuming.”

As the muck was taken from the site – an operation that took seven months – contiguous piles retained the high ground that remained on the boundary.

This also saw carefully positioned flying shores hold back the ground without interrupting construction of the frame once it began.

Pad foundations produced cost and speed benefits for the car park, with piles only used in localised areas where cranes would be housed. A 1,200 mm-diameter drainage pipe takes stormwater to an
attenuation tank.

“You can require 12 weeks to design and manufacture a structural steel frame; with concrete we can be on site within a week. It’s what we do.”

A reinforced concrete frame was used for the car park and all three blocks, as the main contractor felt it could be created quicker than a steel version.

“There is less lead-in time required,”

“You can require 12 weeks to design and manufacture a structural steel frame; with concrete we can be on site within a week. It’s what we do.”

“It’s a bit slow coming out of the basement, but after that we aim to put a floor in every two weeks,” he says.

Work on the smaller hotel and the residential tower – known as Blocks B and C respectively – got under way first, as these areas will be handed over ahead of the large hotel (Block A).

The six-floor concrete frames for B and C have been completed, with three floors of the 14-storey Block A completed by early October. Speed remains of the essence.

“We have separate teams on each block; we are building three jobs in one,”Mr Elliott says.

With such a large concrete pour, sequencing and careful planning was paramount.

“There is a lot of design and thinking to be done,” Mr Elliott says. “We hold fortnightly design team meetings – more as deemed necessary – with our structural engineer, architects and M&E consultants.”

“We have very restrictive planning conditions: we cannot start a pour before 8am due to residential considerations and we are only allowed to continue until 6pm, but we have to finish the path loading process – we can’t leave concrete overnight.

“We have to make sure we have a small enough pour that we can complete it within those hours.” This is a difficult balance when you are racing against the clock on a huge programme. “We do
sometimes overshoot but our neighbours have been very patient,” he says.

As another time-saving measure, steel-framing systems are being used for the external walls. This approach was chosen over blockwork to reduce the risk of weather or labour-related delays.

“We are in a windy area near the coast with a high chance of cranes being off, which would mean we couldn’t lift mortar or blocks,”Mr Elliott points out. “The other issue is the labour shortage in the South-east of England.

“There is a lot of debate but, for me, steel-frame systems are more cost-effective. There is less downtime.”

Aluminium frames were being put in by Yorkshire’s HWA on Blocks B and C in October.

Internal walls will go in ahead of the roofs, with risers and other holes in the frame screened off to provide a watertight environment on a floor-by-floor basis.

Bathrooms for the hotels arrive pre-formed (see box) in a bid to save time and improve quality.

“Then the electrician comes back and stands all over the sanitaryware and shower trays.”

Separate packages have been awarded for electrics, plumbing, air conditioning (Block B) and sprinklers (Block A), with McAleer & Rushe sticking with a predominately Northern Irish team it is very familar with (see box).

“We have our trusted partners, and for a job of this nature we need to be fairly confident they can cope with the programme and they work well together,” he says. “Co-ordination of services is critical.”

Weekly technical meetings are held with all the services subcontractors to ensure works stay on track.

“Everyone has the same goal – to work quickly and effectively – and we know the client always has another job coming, so we don’t cause any grief.”

Mechanical and electrical work got under way on Block B in October and will finish on Block A next September.

As a floor is completed, internal fit-out and decoration work will take place. Hilton is buying the furniture for Block A and specifying its requirements for Block B, while Block C is a shell-and-core contract for Redrow.

Scott Brownrigg is doing the interior design for the hotels and has fortnightly meetings with the client.

“It is a high-end product and the client is clear on what it wants,” Mr Elliott says.

Up to 300 workers will be on site at the peak of the project towards the end of the programme.

McAleer & Rushe has to give Hilton six months’ notification of its date for practical completion so the hotel can begin the process of selling the rooms.

“There will be no going back then,” Mr Elliott admits.

Most of the project’s extended management team and some of its staff fly in from Belfast for intense fortnights of work.

“There is a working culture,” Mr Elliott explains. “The guys come over here and they’re here to work, they go home every other weekend, working the Saturday in between and having the Sunday off.

The core workers are Irish, although the subcontractors do use local labour as well.

“Our guys share two-bed apartments in Bournemouth; they are nice apartments, we know they need home comforts and we want to retain our staff.”

The contractor believes the set-up creates a camaraderie and spirit on site.

“When I started at McAleer & Rushe I was taken around the W Hotel site in Leicester Square and I may as well have been in the middle of Belfast,” he recalls. “It was quite comforting.”

Time for a quick shower

Both the hotels have pre-built modular bathroom pods, created by Hull-based Walkers to Hilton specifications.

These are delivered to site and craned onto the correct floors once the temporary works are taken out for those levels of the concrete frame.

They are then pushed on scoots onto the service risers, allowing internal walls to be built around them and plumbers to come and connect them up.

There are no recesses on the 300 mm-deep concrete floors, so the pod floors have to be very thin.

The pods for the Hampton by Hilton rooms came with thin ceramic floors but bigger pods were required on Block A, meaning the contractor had to build the floors on site.

“We have to tile the floors to take away the risk of damage,” Mr Elliott says. Disabled-access bathrooms were also created on site. 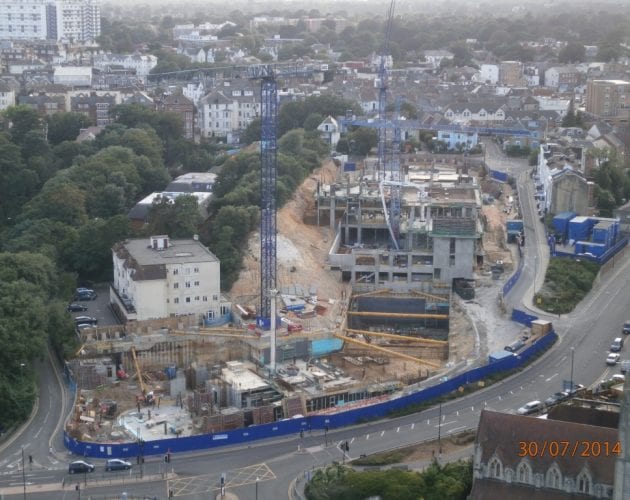