McAleer & Rushe has bagged a hat-trick of hotel wins with a £19m contract to build 146-bedroom Adagio Aparthotel for Artisan Real Estate Investors on its New Waverley regeneration scheme in central Edinburgh.

The six-storey hotel, which will have frontages onto both the Royal Mile and the Canongate, will be built behind an existing facade facing on the Royal Mile. To the rear, the hotel will link with a proposed new public square and pedestrian walkway which will be central to the wider £150 million redevelopment. Work on the hotel is set to begin this month and it is set to be completed in October 2016.

Artisan’s plans for the site include 177,000 sq ft of offices, 28 retail and leisure businesses as well as more than 140 apartments and townhouses, and 40 affordable homes centred around a £6.5m civic square.

“High quality hotel provision is a cornerstone of our development and innovative leisure concepts such as the Adagio Aparthotel add vibrancy, excitement and colour to our plans.”

The other two hotel contracts with a combined value of £18m, awarded to McAleer & Rushe, are a 130-bedroom hub by Premier Inn, which in Spring 2016 will be the first to open outside London. And, a 127-bedroom, 6-storey Premier Inn hotel. The Premier Inn and hub hotel will sit next to each other, with entrances on East Market Street and Cranston Street.

“ We are very pleased to be involved in such a high profile Edinburgh scheme which is so important for the regeneration of this key element of the Old Town. We are very proud to have earned Artisan’s confidence and enjoy working with such a competent and polished developer.”

All three hotels are designed by Alan Murray Architects. 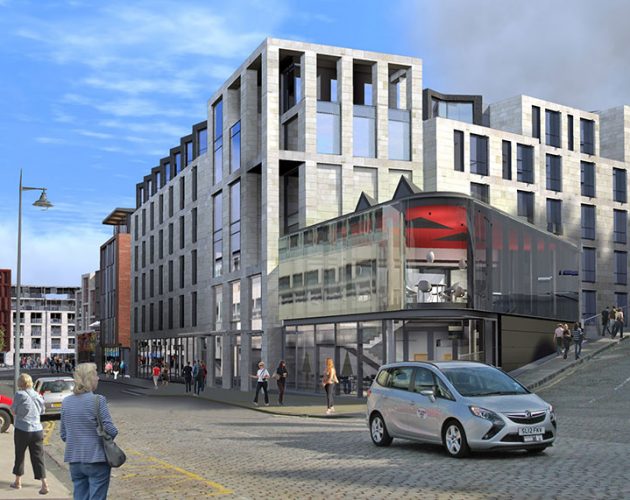