Gold Award for Motel One, Minories

The recently completed Motel One, Minories project has earned a Considerate Contractor 2015 Scheme Gold Award commissioned by the City of London. The scheme marks the first purpose built Motel One opened in England as well as the discovery of an archaeological find described by experts as ‘amongst the very best statues surviving from Roman Britain’.

This is the first Gold Award McAleer & Rushe have been awarded from the London scheme and sets a notable standard. The company would like to commend the contract director, site managers and personnel involved in the project who consistently demonstrated a spirit of pride and awareness to uphold and exceed the requirements of the Code of Good Practice.

The significance of this Gold Award is highlighted by the substantial difficulties that emerged during construction due to the surrounding areas of the site.

Close collaboration was required right through to Practical Completion with the City of London Infrastructure because of their works along Minories concurrent with our activities – this was especially tested during construction of the basement in which the elevation of St Clare Street had to be retained with the road levels some 6 metres above the works.
Constraints particularly developed as the overall footprint of the building was strictly not to be decreased yet being in close proximity to a live public highway access and neighbouring offices and apartments.

To overcome these conditions, bored kingpost piles were installed in a contiguous manner and encased in a capping beam. This enabled the highway to be retained in a permanent state and the remainder of the superstructure to be constructed, and the hotel footprint was not compromised.

Peter Devlin, Contracts Director and Conor Feeney, Site Manager for the project represented McAleer & Rushe alongside Richard Rixon of Endurance Land and Allan Sugg of E C Harris to accept the Gold Award Plaque. The plaque was handed out by the City of London’s Lord Mayor, Alan Yarrow on the 8th May 2015. 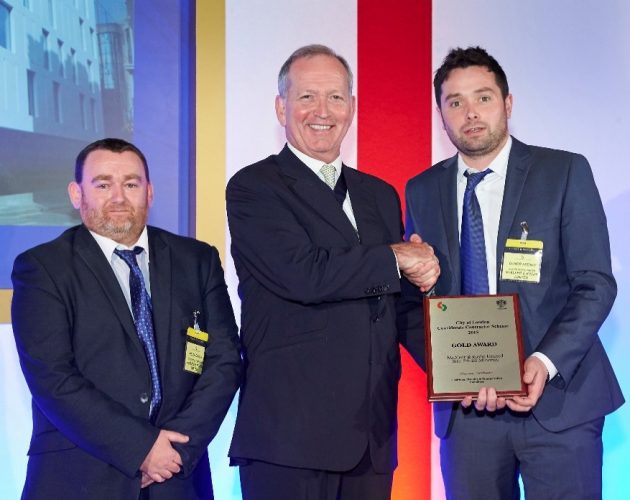