McAleer & Rushe has underlined its position as a leading player in the UK’s student housing market with its announcement of two major student housing schemes delivering 1280 rooms for central Belfast.

McAleer & Rushe has become a dominant player in this sector on the UK mainland and has been working with the leading operators in student housing provision including Unite Students and Knightsbridge Student Housing. The Company is on target to deliver more than 7000 student rooms by the Summer of 2018, with an estimated value in excess of £400m. McAleer & Rushe are currently on site constructing a 759-room student housing scheme for Unite in Stratford, London which is due to complete this summer, together with a 356-room scheme for Knightsbridge Student Housing in Southampton, which is due to complete in 2016.

“These are large scale development and investment projects which underpin our confidence in Belfast and particularly the student accommodation sector where we already have a significant presence. The development of 1280 rooms in the City Centre will help to address the current shortage of purpose built student accommodation which is significantly below the UK average. We are planning to commence construction this Autumn with the developments being completed for the in-take of students in summer 2017”.

Both city centre Belfast student housing schemes will offer a range of accommodation including studios and primarily four, five and six bedroom ‘cluster’ flats, each with their own ensuite bathrooms and study zones with a common kitchen, dining and living zone and with extensive common areas for recreation and study, maximising the opportunity for social interaction.

The McClintock Street student housing scheme occupies the former Belfast Metropolitan College building and forms part of a mixed use scheme ,which will also include a 206-bedroom 4-star hotel which will have an entrance facing on to Blackstaff Square.

Both student housing developments and the hotel, which have been designed by Belfast-based Consarc Design Group, will create in excess of 300 jobs during the building phase, giving a much need boost to the Northern Irish construction sector.

Last week McAleer & Rushe also announced it had signed a £24.7m deal with Belfast City Council to develop a new 100,000 sq ft office building at the site of Clarendon House on Adelaide Street. 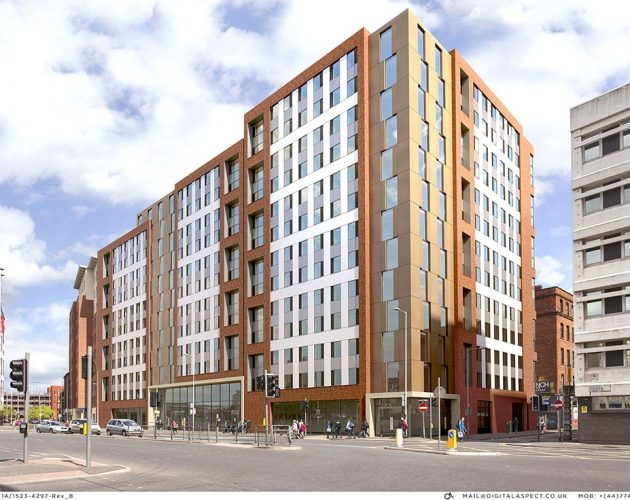