McAleer & Rushe was proud to join with developer Artisan Real Estate Investors at the “Topping Out” of a 146-suite Adagio Aparthotel being built by M&R in the heart of Edinbugh’s Old Town.

The four-storey Adagio fronts on to the Royal Mile and a new £6.5m public square which is at the heart of Artisan’s £150m development called New Waverley which is creating a brand new city centre district for Edinburgh.

The scheme also includes a 127-room Premier Inn and 130-room Hub by Premier Inn which both recently opened, also built by McAleer & Rushe. Other elements include 177,000 sq ft of cutting edge Grade A offices and 148 apartments and townhouses.

We are very pleased to mark this construction milestone with Artisan. The hotel blends in with its historic environment behind an existing façade on to the Royal Mile and a newly created pedestrian walkway linking Cannongate to the square is inspired by the Old Town’s historic ‘Wynds’. It has been great working with such a competent developer and we look forward to working with Artisan on other elements of this fantastic scheme. 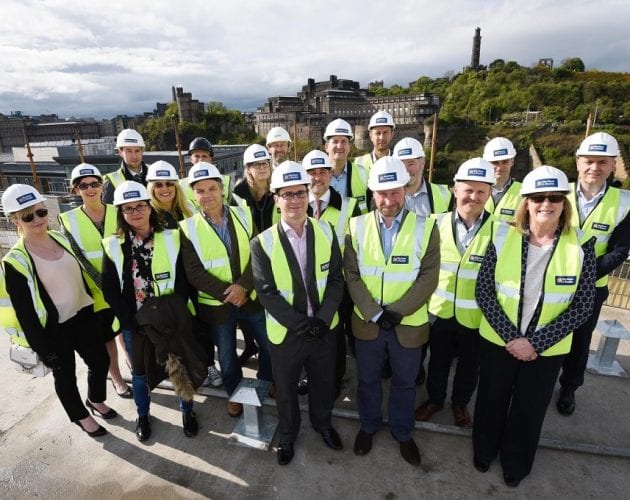