Plans for The Sixth, a £75m redevelopment of the former Belfast Telegraph building, have been approved by Belfast City Council’s planning committee.

The mixed-use scheme at the bottom of Royal Avenue includes 230,000 square feet of creative workspace, alongside ‘active’ ground floor uses such as cafes, restaurants and retail and a roof-top running track. The plans were prepared by Bel Tel LLP, a first of its kind joint venture between McAleer & Rushe and Belfast City Council.

The plans were approved by the Council’s planning committee on Tuesday evening (19 February).

Highlighting the impact of The Sixth on the redevelopment of the city, Councillor Matt Garrett, chair of Belfast City Council’s planning committee, said:

“The Sixth occupies a strategic location on Royal Avenue that will be a catalyst for further regeneration, bringing a historic heritage building back into use as a forward-thinking workspace for creative businesses.

The scheme has been specifically designed to respect the existing built heritage in this part of the city, which is set to be further transformed over the next two to three years, and The Sixth will build on the momentum already generated by the Ulster University investment.”

“The aim of this joint venture is a strategic investment in the city, delivering workspace of a world class scale and quality for local or international occupiers seeking accommodation in the city core.

Council has a particular focus on wellness and well being within the Belfast Agenda, and the inclusion of a roof-top running track as part of this development, highlights the evolving nature and role of workspace in the city centre.

By planning for the future, The Sixth will create real estate that better reflects how and where we work, whilst also bringing back into life a building of significance to our city and media’s commercial heritage.”

“We are extremely pleased that councillors have supported our plans, and have supported the officer’s recommendation to approve our application. We look forward to progressing the development as quickly as funding is in place to deliver the project

As the first joint venture of its kind Bel Tel LLP assembled an experienced team to bring forward proposals that underlined a balance between the heritage of the listed building and the future regeneration of this part of the city.

They have been informed by productive discussion and constructive feedback from Belfast City Council Planners, Historic Environment Division and other statutory consultees over the past 12 months.”

Designed by Stirling Prize-winning architectural practice Alford Hall Monaghan Morris (AHMM), the Sixth will create accommodation for 2,000 high value jobs as part of an emerging creative district. In addition to AHMM the supporting project team includes national planning and development consultancy Turley, Sort Design and commercial agents CBRE and Lisney.
A short video has been released by the joint venture partnership highlighting the Sixth, which will be shown at property and development conference MIPIM in Cannes next month. 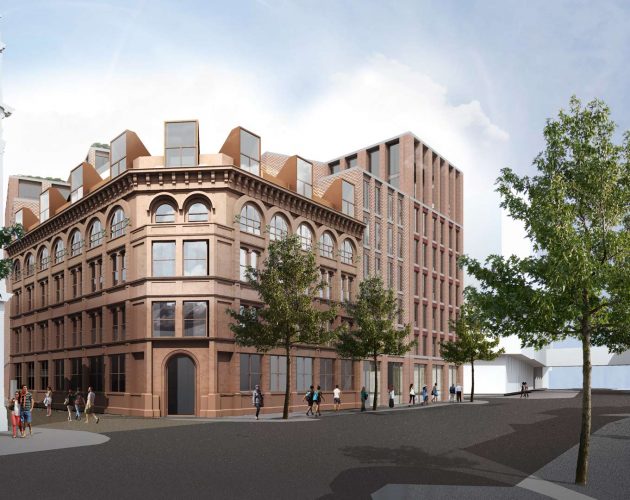