Student accommodation provider Future Generation this week capped an extraordinary year by topping out three schemes in two months in the face of repeated national lockdowns — two of which only left the drawing board as Covid-19 erupted.

Andrew Southern, Chairman of Future Generation, was joined by Dominic Trainor, contracts director at McAleer & Rushe, for topping out ceremonies at the company’s projects in Nottingham and Loughborough yesterday (Tues). 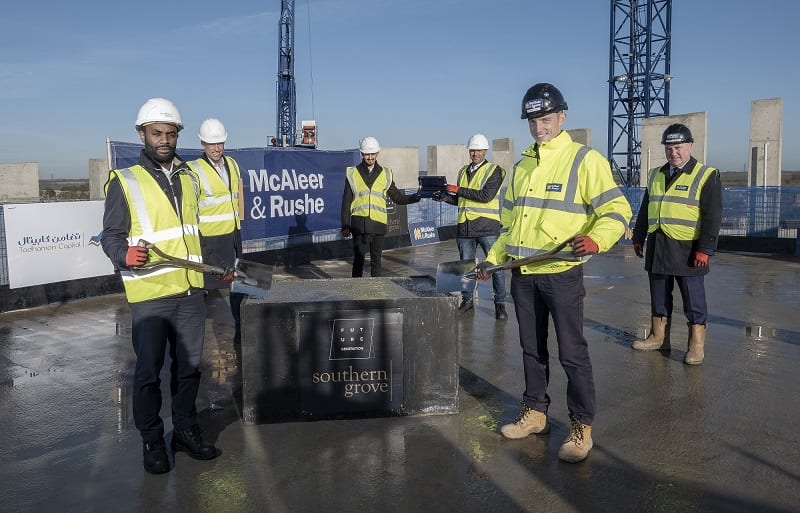 Build contracts for the schemes were only signed in March 2020 so it took only six months to go from breaking ground to topping out. What makes that achievement all the more impressive is that neither construction project was financed by debt, despite being worth a combined £105million.

‘Luxurio’ in Loughborough and ‘The Vantage’ in Nottingham, will between them create 943 student beds close to top-tier universities, with GDVs of £51million and £54million respectively.

The lightning fast progress of these schemes came alongside similarly quick headway made on a third PBSA development during the pandemic — the Guilden Park scheme in Guildford, Surrey. This is also being constructed by McAleer & Rushe and all three developments account for 1,476 beds between them.

Guilden Park is Future Generation’s largest scheme to date and the jewel in its crown, with a GDV of £115million.

McAleer & Rushe faced huge obstacles as it tried to keep all three builds on track. The firm had to negotiate a six-week shut down of the sites during the first lockdown, disruption to the supply chain and far-reaching social distancing measures upon their return as they battled to get the schemes back on schedule for the start of the 2021 academic year. 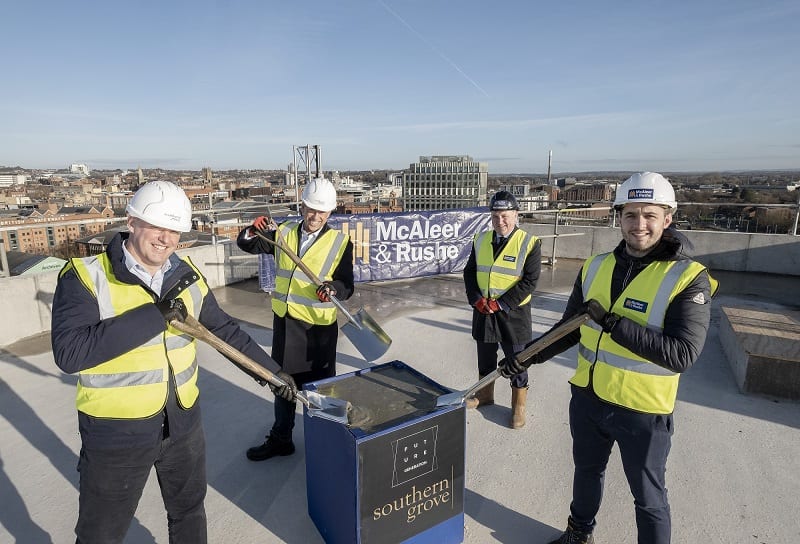 The firm also had to change its procurement regime so supply chains ran faster, hold daily project management meetings to accelerate the pace of construction and change the procedure for design approvals.

The strength of Future Generation’s relationships with its lenders also paid off early on, as it was able to refinance two of its other PBSA projects in Colchester and Sheffield in March. Paying back around £38m to Maslow Capital and refinancing for the operational phase of these projects with long-term debt from a fund advised by DRC Capital cleared the way to financing the construction of these schemes.

Luxurio, a mixed-use scheme, has been designed by Cardiff-based Rio Architects and will feature 458 beds, communal courtyards, roof terraces and green living walls on the outside of the building, with 1,702 sqm of commercial and reception space.

The Vantage, designed by Axis Architecture in Sheffield, will boast 485 bedrooms arranged over 12 storeys. It will be one of the city’s tallest buildings and contain Future Generation’s signature Sky Lounge, which will make the most of incredible views over Nottingham Castle.

Guilden Park, which was topped out in early October, will boast a further 533 beds. All Future Generation schemes are carefully designed with superior finishes and Samsung appliances.

“People throw the word ‘teamwork’ around but we’re going to need a new entry in the dictionary for what it meant for us this year.

“We’ve dealt with everything the pandemic could throw at us. Keeping three schemes of this size on track was no small achievement. We’re incredibly proud of our team and very impressed by the commitment and resourcefulness McAleer & Rushe have shown in adapting to a difficult commercial environment. These schemes have gone up so fast they rival modular building solutions for pace. We exit 2020 feeling very confident in our pipeline and looking forward to welcoming students to all three projects next year.”

“There have certainly been several obstacles to overcome this year and our team have shown great determination to get us to where we are today. None of it would have happened, though, without a level of collaboration that I’ve never experienced before. Full credit goes to Andrew Southern and his team for going to extraordinary lengths to assist us in finding solutions at every turn and, of course, I’m incredibly proud of our own team who proved equal to the challenge.”

“Our development partner and contractor deserve huge congratulations for overcoming the significant headwinds that threatened the sector this year. If anything, their ability to stick to the critical path that will see these projects delivered on time has underlined our faith in the strength of the PBSA sector and the UK’s ability to deliver it. Future Generation remains on track to complete more than 2,000 student beds next summer and our overall investment attitude to student accommodation in the UK remains one of overriding confidence.” 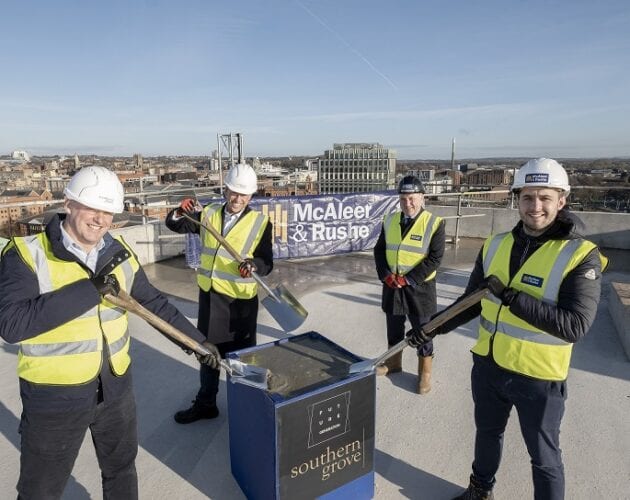