Tyrone GAA are delighted to renew their links with one of the country’s most successful Design & Build Construction companies, having over 50 years’ experience in the construction & property fields. Founded in 1967 by Seamus McAleer, Eamonn Lavery joined the team as Chief Executive in 1971. Both men have worked tirelessly to establish a highly respected business, that whilst operating across the Ireland and GB, remains headquartered  in Cookstown Co, Tyrone.

Both Seamus and Eamonn have been lifelong supporters of the County and their respective home clubs, with the two of them continuing to play a significant role within Club Tyrone.

McAleer & Rushe’s main offices in Cookstown were the venue which witnessed the signing of the new 2-year agreement with Tyrone GAA. The latest venture will see the main McAleer & Rushe logo, and MRP, representing McAleer & Rushe Properties, appear on all Jerseys worn by the Tyrone County teams in both Football and Hurling for the next two years with the option to extend the agreement.

“We are delighted to have the opportunity to work with Tyrone GAA again. Our experience of being sponsor in the past was very positive, and in ways we did not fully expect or appreciate at the time, and we look forward to developing our partnership with Tyrone GAA for at least the next 2 years.

We warmly wish all players and management of all codes the very best of luck for the incoming season and are only delighted to be a part of the next chapter after the heights of 2021.”

“We’re just delighted to welcome one of Tyrone and Ireland’s finest businesses, Tyrone’s own McAleer & Rushe, back on board as our Tyrone GAA title sponsors. Seamus And Eamonn are both long-standing supporters of the GAA at club and county level and we look forward to building on the strong foundations we have in place.”

The reigning All Ireland Football Champions Plus Anglo Celt Cup holders will begin their defence of their titles, strong in the knowledge that supported by such a loyal and robustly proud Tyrone Company they will be given the opportunity to perform at their best at all levels. This will be a strong partnership working together to achieve the best they can be.

Tyrone Gaels everywhere will no doubt welcome McAleer & Rushe back on board and will look forward with new optimism to even greater days ahead. 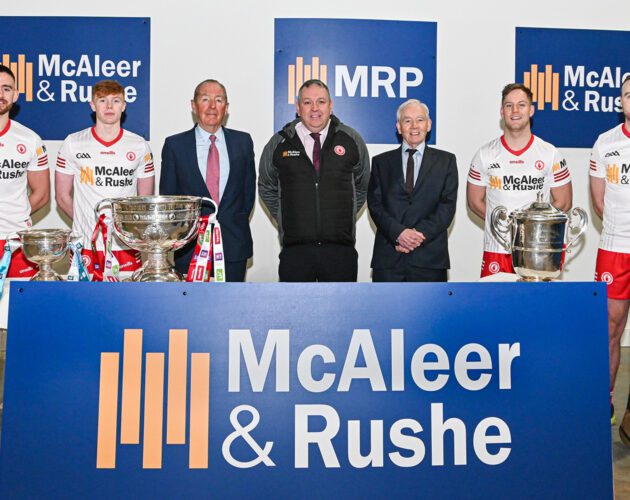